To celebrate the fact that I am FINALLY getting something of a schedule going again and, more importantly, typing up the dozens of pages that have been waiting for my attention, I thought I would sneak you guys a little excerpt from the children’s adventure chapter book I’ve been working on.

Please feel free to give leave a comment letting us know what you think!

The next level of caves was shallower, harder to get to, and obviously not the gathering place the other rock rooms had been. Still, there were no signs of ancient pirate hidey-holes no matter how many times they circled each one with bright flashlights and keen eyes.

Down to only two shallow caves left, Grandpa was starting to worry that his pep talk was going to be for nothing. The boys were dragging again and he was about to suggest that they see if there might be another likely spot to search when Pauly let out a wild and triumphant cry, scaring the seagulls perched around the rock cliff.

“Look,” He crowed triumphantly, pointing his high beam LED flashlight at the back wall of the second to last shallow cave, where something glittered dully against the gray dirt. “Pirate Treasure!!”

The boys surged forward, clambering over crumbled stones with Grandpa hot on their heels. The closer they got, the more they saw glittering remnants scattering across the curve of the back wall. Plastered into the cavern itself. Sealed into the stones for safe keeping. Here, then, was the treasure they had been seeking.

“In room of stone and vision free,” Pauly whispered in awe, looking back out of the cave’s mouth to the frothing blue waters below. “They didn’t bring the treasure here to hide it…”

“They put it in the walls so that it could watch the sea!” John finished excitedly for his best friend.

“It’s almost like the treasure is still waiting, watching for its long lost pirate band,” Grandpa whispered. Then, more loudly, he said, ‘Well done my boys! You’ve found it!”

“You know who would love this?” Pauly asked suddenly, pocketing a dirt encrusted coin he’d just pried from the stone and beginning to work on what might be a delicate necklace. “Dr. Ron. Let’s call him and see if he can come out.”

“Are you sure you want to call him?” Grandpa was shocked to hear such things coming from a 9-year-old who had just discovered treasure. “You know what will happen if we do?”

Pauly slowly nodded his head as John and Grandpa stared at him, or rather, stared over his shoulder at the muted sparkle of newly discovered goodies.

“Paulonious,” Grandpa kept his voice calm and steady, “Dr. Ron would love it and the museum certainly would have all of the resources required to unearth everything…”

There was an uncertainty to his voice, and unmasked question that even the two 9-year-olds could hear loud and clear.

“I bet the set up the exhibit next to the Belle,” Pauly decided smugly.

“With a big sign that has our names on it!” John added, his voice alight with sudden excitement at this new idea.

Grandpa P pulled the two boys into a quick, tight hug. “I am so proud of you,” he told them before digging the old flip phone out of his cargo pants and calling his old friend.
Dr. Ron decided to take the rest of the afternoon off to make the trek for treasure. Slowly making their way back down the narrow path and gathering their trash bags along the way, Grandpa P., Pauly P., and John L. headed back to the diner for a little lunch while they waited.

*I hope that you enjoyed this little snippet! Don’t forget to let me know what you think, I love hearing from you!*

Last month, before the craziness of NaNoWriMo descended once again, I finally completed 2014’s NaNo-novel. The fourth in the Stone Dragon Saga, Dragons in the Deep is currently with my proof and beta readers before the next round of editing begins. In the meantime, I wanted to share a little excerpt from the book with you. (if you would like to see the other books in the series, my author page can be found here and the first book in the series, Dragon on My Neck, is available here)

Let me catch you up: It has been a while since the end of Dragon on the Green. Passiona has folded herself into society life, Anna and Jane have graduate college and become ‘real adults’, Al and his siblings have continued to live with their humans, and a new discovery has shaken up their existence. There is a ship, a pirate ship, that sank in warm Caribbean waters 400 years ago. This pirate ship, mentioned in a king’s holdings and suspiciously otherwise invisible, just may hold the key to finding Al’s parents, and ending Passiona’s bid on domination. There are new characters, new settings, and a different style of writing in this book that I hope you will enjoy…and that will seamlessly flow with the previous 3.

Without further ado…I give you Dragons in the Deep: an excerpt –

“This can’t be real,” Zachary whistled in appreciation, “I’ve never seen anything like it!”

“I don’t think anyone has,” Garron breathed the words out almost reverently, staring in amazement at the scene spread before him on the screen and itching to suit up and dive down to the real thing.

“She looks like she could be on the water, instead of under it,” Lance leaned around Garron’s seated figure to get a better look, “Oh boy, what is that girl doing?”

“Nickel,” Garron hit the call button and startled her out of a staring match with a clown fish, “Have you found something of interest?”

“Well I don’t know,” Nickel admitted, turning back to her perusal of the railings. “I haven’t ever seen ship railings covered in designs like this. I think they’re ancient runes and possibly base Latin words but I’ll have to scan these pictures in to be able to translate anything.”

“I’ve seen a few ships with decorative railings,” Flynn drawled, swimming up beside his partner, “But never ones with decoration on every railing and doorway. Even that mast has some marking at its base.”

“What really gets to me,” Nickel added, “Is that we can make out words. After all of this time under the water the marking should be worn down to an almost indistinguishable smoothness. Instead, the relief is as deep and well defined as if it were carved yesterday.”

“Look at this figure head,” Flynn whistled between his teeth, reaching out a tentative hand to feel the woodworked body. “Normally you find women at the head of a ship, but this…this is something amazing. Almost like a Viking ship, but with a Latin flair. Nickel, take a picture!”

“Hurry up you two,” Lance piped in over their earphones, “You’ve been down there almost an hour and that’s plenty for a first dive!”

“Nickel, snap the picture and come on back,” Garron added, “And bring my bone headed brother with you please! He’s starting to wander off again.”

“Aye aye Captain,” Nickel laughingly agreed, quickly swimming out to take a picture of the astounding figure head before catching Flynn, who was busy attempting to open an apparently locked door to a deck cabin. “You heard the men Flynn,” she giggled at her own rhyme, “Time to go on up to our ship man. We’ll come back down soon.”

“Yes we will,” Flynn agreed, noting the low oxygen in their tanks, “We will be back with tools and time.” This promise was more to the ship than to themselves and, as the duo slowly rose to the surface, the ship seemed to watch them and in watching them, the ship knew that it was time too for long kept secrets to be revealed.

Do want an interesting, well written, and beautifully photographed book on interior design? Are you, perchance, a lover of classics, a devourer of words, and/or enchanted by interior design? 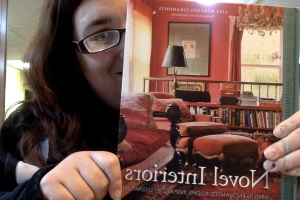 If the answer to any of these was ‘yes’ you should race to get your very own copy of Lisa Borgnes Giramonti’s Novel Interiors: Living in Enchanted Rooms Inspired By Literature. Combining her knowledge of design and literature would make for an interesting read in and of itself, but when you add to those words the beautiful photography of Ivan Terestchenko,you find yourself diving into a space that invites a reader in just to sit in a corner and bask.

With a beautiful Forward written by David Netto, an enchanting and inviting forward which all but begs the reader to pull up a chair and learn their decorating style, and six sections titled with headings such as “Shall I put the Kettle On? (ch 1, pg 21) and Sometimes a Fantasy (ch 6 pg 225) there are many genres and styles to choose from.

While some of the rooms depicted seem overdone or odd to my simple eyes, there are quite a few that appeal to me. I love page 41’s bit on naming your house, the golden mermaid flying over a sink on page 262, and most of the bohemian styles depicted in the chapter title “Anything Goes” (beginning on page 181). However, I think my favorite picture of all is that of a child’s bed, who’s sweet simplicity is depicted on page 39…and will be reinvented in my daughter’s room as soon as I can trust her without bed bars! 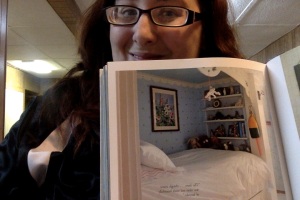 Can’t wait to set this up for her!

Overall I am going to give the book a whopping 5 out of 5 dragons! The set up is gorgeous, the author has a flow of words that matches the photographer’s eye, and I know how I’m redecorating at least 2 of my rooms next time! Now if they would only come out with a Novel Interiors 2 – Decorating with the books of J.R.R. Tolkien, J.K. Rowling, and Nora Roberts. I could FINALLY have a great guide for creating a writing room strait out of a lover’s retreat bed and breakfast in which resides the Leaky Cauldron, which is (of course) located in Middle Earth!

What an ODD bathroom!

The book’s back cover – Even the back is full of gorgeous Terestchenko photos!

Life, ME and Books