There has been a lot of hype the past few years over the 2011 debut novel of author Ransom Riggs. Since I had heard it was ‘amazing’ ‘well written’ and ‘creepy’, all things I tend to enjoy (especially in the fall), I finally decided to pick up a copy of Miss Peregrine’s Home for Peculiar Children at the beginning of September. The way the book is set up attracted me as soon as I saw it.

With old photographs providing the inspiration for our imaginings of characters, and chapters that remind one of the creepy abandoned house down the street, I was pulled in to the story immediately. Then I did something I had never done before: At the end of each chapter I paused for a moment to reflect, and then tweeted a short response to what I had just read. These tweets received little to no attention, but I LOVED it! this allows me to come back a month later and see exactly how I felt as I read the book, while still having the vision of a month apart from the story.

So today this book review will be a bit longer than typical because I am going to go Chapter by Chapter…starting with my Twitter response and then giving a brief look at the story and personal feelings at that point in the book. Since I’ve never done this type of review before, I would love for you to tell me a) how you feel about the set up and if you would like more reviews like this AND b) if you’ve read the book/series and how you feel about it/them!

Now then…let’s get this show on the road!!

Prologue:  tweet – Prologue: I am both intrigued and a bit sad as I finish the prologue. Grandpas are as special as childhood & fairy tales #MissPeregrines

The first sentence, I had just come to accept that my life would be ordinary when extraordinary things began to happen, immediately peaked my interest. The rest of the prologue introduces us Jacob Portman, the main character, his Grandpa Abraham Portman, the catalyst for the story, and the idea of Before & After. Grandpa Portman has always told magnificent stories of peculiar children, an orphanage, and the war. Monsters and mayhem and chaos and friends…and Jacob finally stopped believing in them, even with the pictures and sincerity that Grandpa presented.

I found this both intriguing and a bit sad because Jacob has suffered bullying and ridicule, and chosen to defy his Grandpa’s stories. My grandparents, especially my Great-Grandmother Curtis (may she rest in piece) have been great sources for stories throughout my life and, at the age of 30, I still love to listen to tales of ‘the old days’ and ‘back when I was stationed in…’ I love fantasy, fiction, folk tales, etc and find it incredibly saddening that some people cannot accept this amazing art form after a certain age. Lewis Carroll even once said, “Some day you will be old enough for fairy tales again.” I don’t think I’ve ever out grown them.

No spoilers from me so this will be short…sassy 15 year old boy, family business, big emergency…sadness.

Frightening and emotional, chapter 1’s slow movement and build managed to completely stun me. That does not happen often.

Chapter 2: tweet – Ch. 2: The plot thickens. I am astonished at the vague perfection of Yakob’s familial descriptions. I am excited about the island. #reading

The first appearance of Miss Peregrine and the inkling that an island in Wales might hold the key to Jacob’s ‘acute stress reaction’…the seemingly mundane portrayal of the beginning of AFTER is intriguing and, in some parts, hilarious.

Chapter 3: tweet – Ch.4 the plot thickens, suspense builds….#MissPeregrines So far the narrator has a strong voice, but seems a bit lazed. This’ll be good

I love the lazy and somewhat detached descriptions that still show a slight bit of emergency and/or excitement. It is as though Riggs captured a 15 year old boy suffering from anxiety and depression perfectly! I suppose it helps to have once been a teenaged boy.

The amount of ‘feels’ and mind churning ideas in this chapter cannot be explained within a short sentence. Back in chapter 1 Jacob is told something that he has spent months thinking about. In this chapter you suddenly find yourself thinking you know the answer…here’s a hint, you don’t know the answer. At least not the full answer. Be patient…do not throw the book and pout. Do not repeat my mistakes…;)

The descriptions in this book are AMAZING and the pictures included throughout each chapter are creepy perfection. The narration style had me vacillating between feeling like the story was too slow and a bit boring or BAM! WOW! WHAT?? The up and down of a roller coaster for much less cost!

Chapter 6: tweet – Ch6 WOWSERS! Death Threats, Dinner, and Dodging….oh, and a bit of enlightenment thrown in for good measure. #MissPeregrines

Some of the new characters from the island are so horribly hilarious that I hurt myself laughing. Some of them are horribly scary and at one point I was gasping for air from laughing, read a bit more and choked on my drink because I gasped while still trying to stop giggling. The movement of the story, while not moving much at all in some parts, is a piece of art within itself.

Chapter 7: tweet – Aww Ch7 is all young love with an old lady teenager in a time warp. I suspect the monsters of sheep slaughter #MissPeregrines 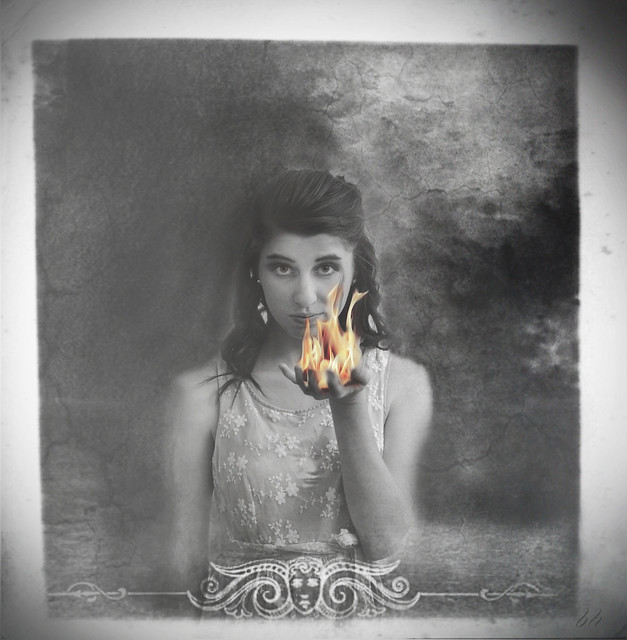 That about says it all!

Look-a-there Jacob discovers something peculiar about his Grandpa, and about himself, that suddenly makes a few more things fall frighteningly into place. Life changing moments happen in an instant sometimes.

Chapter 10: tweet – The short story stalled out but Ch.10 of #MissPeregrines was JAMPACKED with action, adventure, and rain…perfect for our stormy night here.

I was, obviously, trying to write instead of read but the stormy night made me want to get back to the last chapters of Miss Peregrine’s. The book itself was in the middle of a storm, a chase, a discovery, and a good amount of terror and mayhem. I loved it.

The last chapter really blew me away. When I was finished I hugged the book for a moment before looking through the pictures again. Then i ran it through the house to hand to my mother. She stayed up late, late to read the book. She loved it too!

Unfortunately, it took me a few weeks to get the second book but I did get books two AND three at the same time. They are currently waiting in my TBR pile as I work through a few books I had ahead of them.

Overall, I give Miss Peregrine’s Home for Peculiar Children by Ransom Riggs a 4 out of 5 dragons for story and plot line. As much as I do adore this book, there were four or five places that I felt should have been tweaked a bit more so as not to drag the reader’s experience. The cover, back cover copy, and illustrations all earn a 5 out of 5 dragons from me though. The best part about the illustrations, in my opinion anyway, is that they are all legitimate vintage pictures. Let me share with you what is said about these photographs within the afterword:

All the pictures in this book are authentic, vintage found photographs, and with the exception of a few that have undergone minimal postprocessing, they are unaltered. They were lent from the personal archives of ten collectors, people who have spent years and countless hours hunting through giant bins of unsorted snapshots at flea markets and antique malls and yard sales to find a transcendent few, rescuing images of historic significance and arresting beauty from obscurity – and, most likely, the dump.

Items like found photographs, inspiration from beautifully abandoned houses, and an uncanny ability to portray characters as real to life as one could expect the peculiar to be brought this book together in a way that made me laugh while getting my spine tingled. I am looking forward to finishing my current read and diving back into the world of Riggs and his peculiar friends!

Have you read this book? Are you excited about the movie releasing in April 2016? Did you like this form of review? Suggestions? Leave me a comment below and let’s get chatty! I can’t wait to hear from you all. Have a great week!

There are a lot of fun things going on in the Tyree Tomes world right now! Three of the most exciting (to me anyway) are the new line of quizzes and lesson ideas to go along with the Stone Dragon Saga books, Leonard’s Wildlife Picture Book Series (name still a work in progress!), and the Little Monster’s Story (also a name WIP).

If you’ve been reading this blog for very long, you’ve probably heard about both of those first two items. I am very proud of my dragons and their story, and I am incredibly excited for Leonard and his friends to join our bunch. However, the Little Monster has been under wraps for the most part. Want to know a secret? I didn’t write it! I will be making sense of the story, setting it up in book form, and presenting to you very soon…but the real author behind this adorable early (EARLY) childhood picture book is my daughter.

That’s right, my one month from being 3 year old Monkey has written her first book. She started telling the story as a bedtime story to her baby dolls. At first, I didn’t pay much attention since she makes up cute stories and scenarios all the time. However, this was different because, after the third night in a row of the exact same wording to the story, I realized that this story was one of THOSE. You know, one of those stories/poems/art pieces that you find doodled all over the edges of your notepads or menus until you just write it out and complete the silly thing. So that’s what we’re doing. Her goal has been to ‘be like Mama and Papa‘ and write and ‘Be like Gaga’ and draw/illustrate. You will see her story and her illustrations in the next few weeks (Hopefully the Good Lord allows us to get it done so quickly!).

That’s most of what’s new in the Tyree Tomes world.