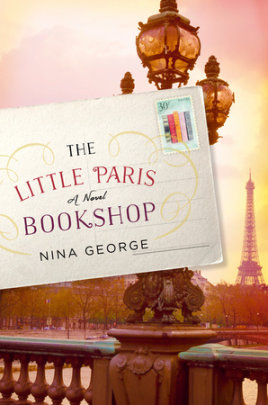 *I was provided a copy of this book free of charge in return for my honest review. The following opinions are my own*

The Little Paris Bookshop by Nina George has a great summary on the back and an eye catching cover. However, I would not be perfectly honest if I didn’t tell you that this entire set – up, and the story between the covers, has be coming away with some very large mixed feelings.

On one hand, the summary is well written. On the other hand, the beautiful cover has a very minimal connection to the actual story line…yes it is partially set in Paris. However, there is so much more that could have been done to bring out the feel of the story through the cover art. I give the cover and summary combination 4 out of 5 dragons.

Now let’s move on to the story. I wish that I could tell you it immediately began to pull me in and i couldn’t put it down. That just isn’t the case. I’ve had the book for almost two months and I didn’t get through the first 3 chapters for a month and a half, the beginning just felt that sloow  to me.

There are several sections in the book whose inclusions baffle me. They don’t seem to add much, if anything, to the plot arc, the actions are so minuscule or non-existent that the story gains nothing but does get confusing for a bit. For example, the main character is called by several old nicknames during the story…3 or 4 of which are not explained and not used again. There is no background or additional information that allows us useful insight into the main character, just random, seemingly unimportant names tossed in to the story.

The main male characters are given a lot of background, some beautiful idiosyncrasies, and amazing backgrounds so that you want to know them better; however, Ms. George has written these great characters who feel like they should be friends of ours but are written almost flatly. The most well written and emotionally charged sections of the book are written from the perspective of the ‘missing’ main character, the woman who Jean Perdu (main character #1) loved, lost, and lost it over.

To this point, it may seem as though I don’t like the book but this is where the major mixed feelings start to rear their heads. A major action happens that sucked me back into the book and fulfilled a promise from the book summary. I got a little excited and kept reading…and reading…and reading. For a book that isn’t really that long (around 400 pages) it felt like I was slogging through hundreds of pages. Just when I would be ready to give up, a fun, exciting, and amazing little tidbit would happen and I would be sucked back in. It wasn’t until the final few chapters that I really got pulled into the story and felt that Ms. George was hitting her stride with it.

As an author, I understand the  use of these elements and actions that both moved and stalled the story. But has a reader who had been promised certain things, I was concerned with parts of the story and found myself wishing there had been a bit more consistent movement to the story

Overall I give this book 3/5 dragons. I enjoyed a lot of it, but felt the story was inconsistent and fell flat in a few places.

Life, ME and Books